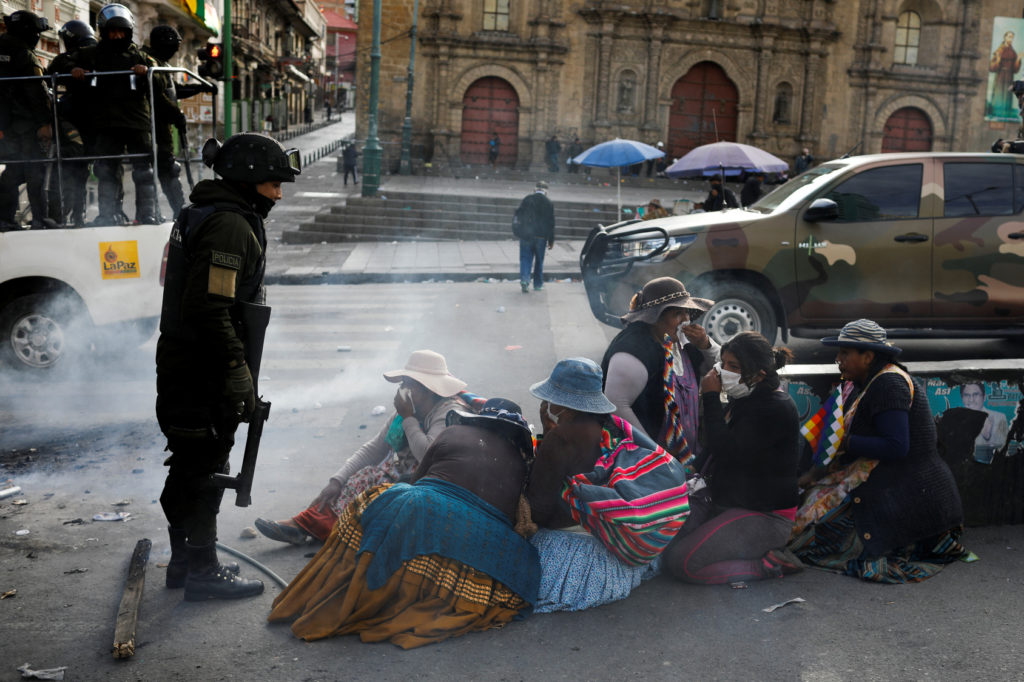 An independent report on 2019 post-electoral violence in Bolivia – which found that gross human rights violations and other acts of violence were committed by security forces, as well as by civilians – has received unprecedented support from both the government and civil society organizations.

Bolivia and the Inter-American Commission on Human Rights (IACHR) jointly established the Interdisciplinary Group of Independent Experts on Bolivia (GIEI) to investigate violence and human rights violations that took place during the post-election crisis in 2019. The GIEI outlined in its report, released on 17 August 2021 and completed with the support of Justice Rapid Response experts, that violations including systematic torture, summary executions and sexual and gender-based violence (SGBV) were carried out from 1 September to 31 December 2019, leaving 37 people dead and around 800 injured.

In response to the report, Bolivian President Luis Arce apologized to the victims and committed to implementing the GIEI’s recommendations, including more detailed investigations and reparations, as well as judicial reform. The report not only highlighted SGBV, but also violations carried out based on ethnicity, specifically targeting indigenous communities. It revealed that the violence at the hands of both security forces and civilians is symptomatic of a deeply divided society in a context of impunity.

“The violence was the consequence of the political environment and political polarization,” said Marlon Weichert, a federal prosecutor in Brazil who was invited to be a member of the GIEI in his personal capacity. “We are talking about the characteristics of a civil conflict – and if it isn’t stopped now, in the long term it could even turn into a civil war – in which two or three groups of civilians fight among themselves.”

Allegations of electoral fraud and the resignation of former president Evo Morales – who had served three consecutive terms from 2006 until 2019 – sparked massive demonstrations in October and November 2019 both for and against giving him a fourth mandate.

Subsequent massacres against protestors were concentrated in the cities of Sacaba and El Alto (the neighbourhood of Senkata), where 20 people were killed. These took place after Jeanine Áñez – an opposition senator who had declared herself interim president when Morales resigned – issued a decree on 15 November 2019 that granted the military broad powers to use force against protesters.

At the behest of the IACHR, the GIEI was created in 2019, bringing together five high-level technical experts in the field of human rights, including Mr. Weichert, who is also on Justice Rapid Response’s roster. The team’s responsibilities included planning and carrying out a technical analysis of the lines of investigation already underway, ensuring these investigations were aligned with international human rights standards, and preparing for a comprehensive reparations plan for victims.

In October 2020, Mr. Arce won newly called elections, bringing back into power the ‘MAS’ socialist party that Mr. Morales, who had since left the country, had helped found. Following a request for support from the GIEI in late 2020, Justice Rapid Response deployed experts from its roster specialized in SGBV investigations, military and satellite imagery analysis.

At the outset of the investigation, it became apparent to the GIEI that there was a particular need for dedicated SGBV support.

“After our first visits, we could immediately identify that the gender issue was a strong element behind much of the violence in 2019, and we also identified cases of sexual violence,” said Mr. Weichert.

Marta Valiñas, a senior SGBV investigation expert on Justice Rapid Response’s roster who was subsequently deployed to the GIEI, in turn encountered a pervasive reticence of SGBV victims to come forward in Bolivia, based on a lack of trust in the authorities and the judicial system.

“The lack of trust that anything will be done for victims, and the lack of pro-active investigation of sexual and gender-based violence leads to a very high level of impunity for these crimes in Bolivia,” said Ms. Valiñas. “It also leads to underreporting that affects even a body like the GIEI’s ability to fully document what might have been the real numbers of these types of acts.”

The GIEI documented several instances of gendered and sexual violence amid the 2019 political violence, including rape, forced nudity, stigmatization of victims, threats of violence, discriminatory insults, and symbolic and reproductive violence.

“What happened in 2019 is linked to very deep wounds and polarization in Bolivian society that are expressed in a very violent manner – including through harassment and violence against women who are political and social leaders, and activists,” said Ms. Valiñas.

One notorious case was that of Patricia Arce, a mayor who was physically forced out of her office, made to walk around the town barefoot, as members of the crowd threw red paint, gasoline and urine on her, and chopped off her hair. After the attack, her children were threatened. Despite continuing to live in fear, she is still active in political life. Ms. Arce is a member of the MAS party, but such gendered attacks take place on both sides of the political divide, said Ms. Valiñas.

Through the increased focus on SGBV investigation, both sexual and gender-based violence and the gender elements of other human rights violations were documented in greater detail and given a prominent place in the GIEI’s final report, including in the recommendations for reparations and investigation plans. This is of crucial importance for future action from the Bolivian authorities and will guide organizations that will be monitoring and advocating for implementation of the GIEI’s recommendations.

The GIEI recommended that Bolivia prioritize SGBV criminal investigations, whether these cases were already open or not, and also consider how gender affected the way crimes were carried out.

President Arce announced in November 2021 that further to the report his government is working on judicial reform to make justice work “at the service of the people”. The reform is set to include measures to tackle violence against women and to clamp down on corruption.

“There is a need to rebuild trust in the justice system,” said Mr. Weichert, who hopes that concrete action will be taken against impunity. “Everybody, from across the social spectrum and all political groups is unanimous in saying that the justice system in Bolivia is not trustworthy. When the failure is so strong, people – in any country – will use their own hands to solve disputes.”

This was the third Group of Independent Experts established by the IACHR, with the previous two taking place in Mexico and Nicaragua.

Justice Rapid Response also deployed an expert to help build the GIEI Bolivia’s capacity to conduct satellite imagery searches, as well as a military advisor to provide insight on protocols, weaponry, ammunitions, and rank structures related to the military and police units operating in the areas under investigation.