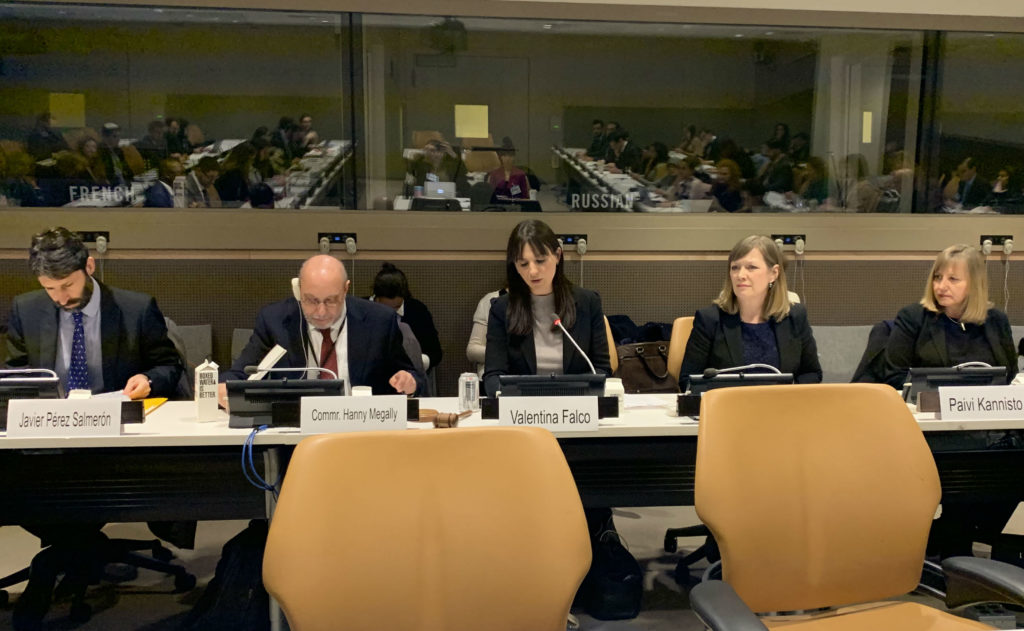 Applying child rights expertise to investigations in armed conflict can bring about more immediate impact for both girls and boys in terms of humanitarian action and accountability, agreed panellists at an event hosted on 30 January by Justice Rapid Response at the United Nations (UN) headquarters in New York.

The event, sponsored by the permanent missions of Canada and Sierra Leone to the United Nations, followed the recent release of a child rights report from the Independent International Commission of Inquiry on Syria, “They have erased the dreams of my children”: children’s rights in the Syrian Arab Republic. Participants included representatives from the Commission of Inquiry and UN Women, and the Department of Peace Operations of the United Nations.

Children surviving human rights violations have unique needs and face different challenges than adult populations in achieving access to justice. This event highlighted some measures needed for the international community to take in order to ensure that child rights violations are properly investigated.

“We urge States to encourage bodies like the UN Security Council and Human Rights Council to include both dedicated child rights expertise and reporting obligations on child rights in the mandates of investigation and reporting mechanisms,” said Nina Suomalainen, Executive Director of Justice Rapid Response. “There is unfortunately a significant lack of resources made available for child rights deployments and in turn for child rights protection.”

The latest report is the first from the Commission of Inquiry to focus exclusively on child rights in the conflict in Syria. This was made possible by the use of dedicated child rights expertise and analysis in the Commission’s investigation.

“The Commission of Inquiry has been cautious in reporting from a child rights perspective to ensure adherence to the ‘do no harm’ principle,” said Hanny Megally, one of the commissioners. “The support of child rights expertise has allowed us to specifically report on what is going on with regards to how boys and girls are affected differently in this conflict.”

The report documents the devastating consequences of the conflict in Syria on children. They have been killed and maimed, and subjected to myriad violations by warring parties since 2011. Rape and sexual violence have been used repeatedly against men, women, boys and girls as a tool to punish, humiliate and instill fear.

“This documentation must be used to help us to have an impact now,” Mr. Megally said. “There is a need for strong language at the highest levels, including the Security Council, and with it, action.”

The discussion highlighted the importance of the work of civil society organizations documenting child rights violations on the ground. Child rights expert Javier Pérez Salmerón, deployed to the Commission, said that one of the added values of his presence is to strengthen the collaboration of the Commission with a large network of civil society organizations conducting documentation in Syria, thereby consolidating a child-centred approach to the documentation of violations. He also underscored the need to understand armed conflict from the perspective of the children, who deserve to participate in the accountability process.

Ambassador Michael Imran Kanu, of Sierra Leone, confirmed the importance of having child rights expertise in victim-centred documentation and accountability processes. Sierra Leone holds a unique place in the issue of accountability on child rights in armed conflict. In the case of Sierra Leone, said Ambassador Kanu, the role of civil society organizations was crucial in actively documenting and reporting violations, even before the transitional justice and accountability mechanisms were established. The impact of violations against children, and of whether they have been properly addressed by the justice processes, is still felt today in Sierra Leone.

The effects of the conflict in Syria will also be felt in the country and the broader region for generations to come, said the Ambassador to Canada, Richard Arbeiter, who commended the integration of an accountability approach that takes into account gender and child rights.

Justice Rapid Response has been building its roster of more than 700 experts to include more child rights experts. They have been deployed to document international crimes and human rights violations committed against children in Syria, Iraq, Myanmar and the Central African Republic among others.

“We at Justice Rapid Response are committed to increasing the amount of child rights experts on our roster and to deploying them where they can have a real and lasting impact on children’s lives and well-being,” said Ms. Suomalainen.