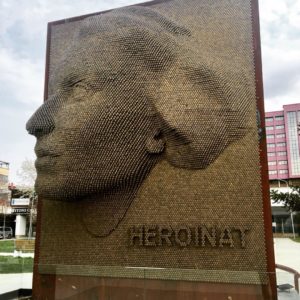 The Heroinat Memorial in Pristina, Kosovo

Justice Rapid Response expert Eleonor Fernandez Munoz and Deputy Chair of the Commission for the Verification and Recognition of Sexual Violence Victim Status in Kosovo Jeta Krasniqi share their perspectives on Kosovo’s efforts to address the effects of sexual violence that occurred in the 1998-1999 conflict.

Conflict-related sexual violence remains a widespread, deeply debilitating tool of war. Its effects – physical, psychological, and societal – are long-lasting and far-reaching, spreading through communities and across generations. Women, men and children who are the survivors of sexual violence often struggle with psychological trauma, social stigmatization, economic disempowerment and other challenges. These effects in turn impede accountability for perpetrators, as well as recovery and reintegration for survivors and their access to justice and reparations. On a broader level, widespread and long-lasting impunity from conflict-related sexual violence can hinder efforts to build a sustainable peace.

Reparations can help end this cycle of debilitation by empowering survivors to break free from a pattern of discrimination and stigma to restore their dignity and reclaim their rights. Kosovo[1] is one example of a country that is rising to this challenge and working to address the effects of sexual violence that occurred in the 1998-1999 conflict.

Setting the legal foundations for reparations

“Legal recognition was the first step in formally recognizing that crimes of sexual violence were perpetrated during the war in Kosovo,” said Jeta Krasniqi, Deputy Chair of the Commission. “The moral and legal recognition of this crime changed the political and social discourse. Recognizing sexual violence as a crime lifted the weight of shame from the shoulders of victims, and from their families and larger communities.”

In 2014, the Assembly of Kosovo approved a law that granted legal recognition to survivors of sexual and gender-based violence (Law No. 04/L-172). In 2015, the government passed a regulation to allow survivors of conflict-related sexual violence to be given official status as civilian victims of war eligible for reparations that include a monthly pension, as means of implementing this law. Finally, in 2017, the government allocated a budget of one million euros for the process of recognizing and verifying the status of survivors of war-time sexual violence.

In 2018, the Commission for the Verification and Recognition of Sexual Violence Victim Status in Kosovo was established and began providing reparations to survivors of conflict-related sexual violence for the physical, psychological, economic and social trauma they endured. Those who obtain this status are entitled to a monthly pension of 230 euros. The Commission hopes to have a transformative effect on Kosovar society, by raising awareness of the prevalence and impact of sexual violence and denouncing these crimes and the culture of impunity that exists around them.

Justice Rapid Response, in partnership with UN Women, deployed a gender expert in April 2019 to support the work of the Commission in assessing evidence of sexual violence from the conflict 20 years ago. Eleonor Fernandez-Munoz has over a decade of experience in victim-centered reparative justice efforts. She worked closely with the members of the Commission and its secretariat to discuss the psychological impacts of sexual violence on survivors, the challenges in processing applications, and the importance of reparations efforts for transitional justice. This initiative, she says, is unprecedented.

The effort has not been without its challenges. Both women agree that the lack of evidence and the time lapse have made it difficult for the Commission to assess applications.

“It is a difficult and sensitive process, especially as it is happening nearly 20 years after the war. The time, the lack of evidence, the limited information, and the trauma make this a challenging process,” says Ms. Krasniqi. On top of these concerns, there is also the risk of re-traumatization of survivors and the weight of public expectation.

That said, if the Commission succeeds in providing ongoing, individual reparations, it will achieve an unprecedented accomplishment, according to Ms. Fernandez-Munoz. “Efforts to provide reparations for victims of international crimes in other contexts, especially sexual violence victims, have been unsatisfactory so far,” she said, citing cases before the International Criminal Court, the Extraordinary African Chambers in Senegal, and the Extraordinary Chambers in the Courts of Cambodia, where victims received either minimal lump sum payments, or no payment at all.

“The reparation initiative is a major opportunity for Kosovo,” said Ms. Fernandez-Munoz. “It is a chance to move forward and remove the social stigma, to empower the victims and assist in their healing. The reparation process could hopefully be the beginning for further action to fulfill the rights of victims to justice and have a transformational effect in Kosovar society.”

Ms. Krasniqi agrees. “At times, it feels intimidating to ask someone to share their most personal, horrible story with you, a story that for twenty years they tried to leave behind. A story they might have kept in secret for years, one that caused them great suffering, sometimes even destroying their families and dreams.”

Jeta Krasniqi is Deputy Chair of the Commission for the Verification and Recognition of Sexual Violence Victim Status in Kosovo. Ms. Krasniqi currently holds the position of Programme Manager with the Kosovo Democratic Institute. Previously, she served as Political Advisor to the former President of Kosovo, Madam Atifete Jahjaga, where she worked on foreign policy and gender equality. Ms. Krasniqi was the Coordinator of the National Council for Survivors of Sexual Violence During the War, where she was engaged in awareness raising, drafting the legal framework and building institutional support for survivors of conflict-related sexual violence in Kosovo.

Justice Rapid Response expert Eleonor Fernandez-Munoz has over a decade of experience in victim-centered reparative justice efforts. She has been working as a Legal Consultant for the Extraordinary Chambers in the Court of Cambodia (ECCC) since 2011, assisting with the interviewing of Sexual and Gender-based Violence (SGBV) victims and witnesses, evidence gathering and the prosecution of SGBV cases.

[1] All references to Kosovo are understood to be under United Nations Security Council resolution 1244 (1999).