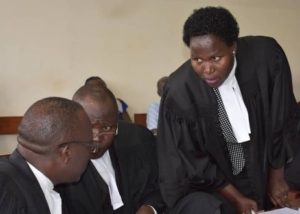 In 2008, the Government of Uganda set up the International Crimes Division to bring to justice those responsible for war crimes and crimes against humanity inflicted upon the civilian population in Northern Uganda since the 1980s. In 2018, Uganda requested support from Justice Rapid Response in prosecuting Thomas Kwoyelo, a former senior commander of the Lord’s Resistance Army (LRA) who was indicted with war crimes, crimes against humanity and under the Penal Code Act on 93 counts including murder, rape, sexual slavery, torture, enslavement, kidnapping and pillaging.

Senior Prosecutor Florence Akello and Justice Rapid Response Roster expert and barrister Serena Gates shared their experiences of working on this case when they met on the sidelines of the 18th Assembly of States Parties to the Rome Statute.

A case study on Complementarity

“Our engagement with Justice Rapid Response started in 2018 when we wanted help in building a prosecution case for sexual and gender-based violence (SGBV) crimes,” explained Ms. Akello. The SGBV charges were added later to the original indictment and in order to gather evidence for these charges, the prosecution needed to record additional statements from victims and witnesses. SGBV has been largely unaddressed in Uganda due to a social taboo around discussing sexuality and Justice Rapid Response was asked to support the prosecution team on the case to strengthen the evidence relating to SGBV charges against Kwoyelo.

What sets Uganda apart from other countries, said Ms. Gates, is that there are ongoing proceedings against LRA commanders in the International Criminal Court and also national proceedings in Uganda.

Having the appropriate legal framework

A first hurdle for the Government of Uganda was to establish whether or not there were legal grounds to prosecute Kwoyelo and whether to prosecute him under domestic or international law. “Governments need to have a legal framework in place in order to prosecute international crimes,” said Ms. Akello. “The lack of this in Uganda has had an impact on the prosecution of the case.” The recently enacted International Criminal Act that domesticated the Rome Statute only applies to crimes committed from the time it was enacted in 2010. It does not apply to past atrocities which can only be investigated and prosecuted by the International Criminal Court.

Gathering evidence from survivors of SGBV crimes requires specialist training in order to avoid re-traumatizing victims who may be vulnerable due to prior trauma, background or age. Every country’s legal system is evolving regarding witness protection, said Ms. Gates, and Ms. Akello acknowledged that for Uganda’s prosecution team, a significant challenge of the Kwoyelo case is that Uganda does not have witness protection law in place.

“It has been difficult to protect witnesses and victims and we have had to develop ways to do this in the absence of a domestic legal framework,” said Ms. Akello. Justice Rapid Response provided witness protection, psychosocial support and prosecution expertise to the case. The Justice Rapid Response psychosocial support expert, who was present during hearings, was also able to conduct psychological assessments of witnesses. Afterwards, witnesses appeared more confident and better prepared for the challenge of giving evidence against Kwoyelo.

An ongoing challenge in pursuing accountability for international crimes in Uganda is the gap in resources and funding, said Ms. Akello. She has seen that prosecuting international crimes requires sufficient resources to avoid delays, which “have an impact on victims because they lose interest in the legal process. They also create the feeling for victims that actually there is no one to deal with their problems and they have to find another way to heal.”

Ms. Gates is optimistic that the challenges for Complementarity in Uganda are “surmountable” and Ms. Akello encouraged other governments to learn from Uganda’s experience. “We need to consolidate the peace, but this has to be balanced with accountability. We need to give victims an opportunity to be heard in order to have meaningful reconciliation,” said Ms. Akello. “The accountability process is compromised when there are delays and, as a result, victims may be reluctant to participate in reconciliation processes.”

“In war you see the best and worst of humanity,” said Ms. Gates. “Unless you push for accountability, you will see much more of the worst of humanity. In tomorrow’s conflicts, the decisions that commanders make will be shaped by whether perpetrators of war crimes are held to account today.”

Florence Akello is one of the lead prosecutors for Uganda on the Thomas Kwoyelo case. In her work as an Assistant Director of Public Prosecutions, Florence is in charge of a regional office and oversees six regional stations. Florence grew up in the Northern part of Uganda, and her decision to study law arose from witnessing the massive human rights violations committed during the conflict in the North. In her work as a prosecutor, she handles a number of complex and highly contested cases including the Kwoyelo case.

Serena Gates is a Justice Rapid Response Roster expert, who is a senior barrister in the United Kingdom with a domestic practice focused on serious organized crime, fraud and serious sexual offences. She has worked extensively to build capacity in foreign justice systems in a number of countries such as Syria, Colombia, Sri Lanka and Uganda, where she provided prosecution mentoring support to the Office of the Directorate of Public Prosecutions in the Kwoyelo case, particularly on charges relating to SGBV.