“The World Must Not Let the Atrocities in Syria Go Unpunished”

“The International Criminal Court cannot prevent crimes,” says Andras Vamos-Goldman. Which is why he cannot sit back and do nothing. 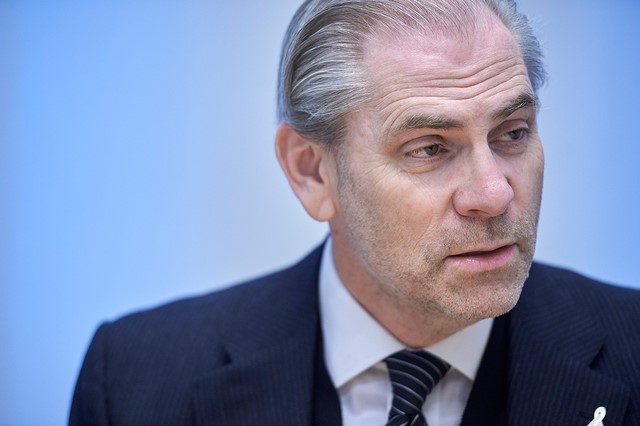 “The International Criminal Court cannot prevent crimes,” says Andras Vamos-Goldman. Which is why he cannot sit back and do nothing.

Mr. Vamos-Goldman, you could have led a peaceful diplomatic existence. Why did you establish a pool of experts in 2009 for the prosecution of war crimes?

The idea for the establishment of Justice Rapid Response (JRR) arose before that. With the end of the Cold War, it became possible to create special tribunals for the prosecution of war crimes, as was created in ex-Yugoslavia for example. The founding of the International Criminal Court in 2002, which I aided in establishing, is ultimately a consequence of this development.

Were you yourself involved in the investigation of war crimes?

To draw an analogy, JRR is therefore a kind of services provider for the International Criminal Court?

Precisely. Our mission is to insure the quality of war crimes investigations. The expert personnel to this end are already in place in national governments, international organizations, and the private sector. JRR’s aim is to pool the necessary personnel capacities and place them in the service of the international community.

Why does this task call for an international organization? Nations can also prosecute war crimes themselves.

Of course, primary responsibility lies with the nations themselves. But generally countries torn by civil war hardly possess the necessary infrastructure and are actively engaged in reconstruction. Thus it is the task of the international community to support the locally available personnel.

Do you respond to every request or do you verify beforehand whether the country in question is actually ready for investigation?

We do not respond to every request. The investigation must be carried out in accordance with international law and its purpose must be to determine the people or parties responsible. Furthermore, our experts must be able to investigate freely and securely. Our expertise is also frequently utilized by UN organizations, such as the Office of the High Commissioner for Human Rights.

Do you also train experts?

We conduct training in various parts of the world. The graduates are nominated by their employers, in other words by a governmental agency, a university institute, or a business. At the moment, the steadily growing pool consists of 530 experts from around the globe. For example, if someone needs an Arabic-speaking forensic scientist specializing in torture investigations, they can contact us. But we can also provide a corresponding expert whose native language is Spanish.

How is it possible that these people are operational at a moment’s notice?

Right now, for example, we have 14 experts from Switzerland in the pool. They work in the foreign ministry, the justice system, and with the police. When Switzerland nominates these people for training courses, it simultaneously declares its willingness to temporarily release them from duty.

Your parents were Hungarian Jews and lived through the Holocaust as children. What influence does their story have on your engagement?

I do not think about it constantly. Its impact is relatively indirect.

You once spoke of the “syndrome of the second generation.”

According to my experience, the first Holocaust generation has been very cautious in its appraisal of the past. The second generation responds to this caution by confronting itself – and in the process slightly overcompensates for this carefulness.

What do you mean by that?

I have always had a strong sense of justice. Around 1996 and 1997 I was working for an international law firm and concerning myself with economic issues. When I heard that negotiations had begun for the establishment of an international criminal court, I felt that I wanted to be there and that my current occupation was not my primary calling. I thought, “This is meaningful and could help disrupt the spirals of violence brought on by injustices that have gone unpunished.” I was not necessarily thinking about my parents, but rather about the numerous violent crimes that have occurred since. These crimes show that we did not learn our lesson from the Holocaust.

You wanted to overcome the second-generation syndrome by taking action. But you also could have sought a dialogue with your parents.

Of course, I also tried speaking with my family about their experiences. But one cannot merely talk with Holocaust survivors “a little bit” about the Holocaust. One must expect to be inundated by descriptions. That is one of the reasons why Holocaust survivors are often reluctant to speak with their own families about their experiences. It is simply too much. A conversation with my parents was not my challenge. The challenge for me was to do something so that crimes against humanity did not remain unpunished.

How have your parents reacted to your engagement?

My father died before it began. My mother was very proud of me. She sent the film recording of one of my speeches to all of her acquaintances.

Since the establishment of the International Criminal Court there has been no decrease in the number of genocides and crimes against humanity.

The International Criminal Court was not founded to prevent these crimes. The Criminal Court undertakes criminal prosecutions when nations are either unwilling or unable to do so.

But should it not also act as a deterrent against acts of violence?

It does this as well. Many violent criminals in the world take care not to be dragged before the criminal court in the Haag. The International Criminal Court has only existed for 13 years. This is not a long time. Progress in the coexistence of nations is not a question of years, but rather of decades. We should not direct our hopes for an end to war crimes and atrocities at a court that ensures justice in a supplementary fashion. The responsibility for the cessation of these crimes lies with us all.

The President of Sudan, Omar Bashir, was able to travel to South Africa despite an international warrant for his arrest.

But the International Criminal Court is not responsible for this. The mere fact that an arrest warrant exists and that people like Omar Bashir must carefully consider where they can travel and whether they can return should be considered a success. As a consequence of Bashir’s visit to South Africa, a South African court has initiated proceedings against him. It is therefore unlikely that he will travel there again. The existence of the International Criminal Court makes the life of such people a bit more uncomfortable.

When someone witnesses a crime, he calls the police. But there is no international police department.

There is more than one police department at the international level. If a conflict leads to atrocities, there are always multiple potential perpetrators: the nation in question, militias, international peacekeeping forces.

Who takes on the role of the police?

The Syrian President Assad has been shelling the Syrian populace for years and should be arraigned before the Criminal Court. Nevertheless, he is now to be included in peace negotiations.

I cannot give you answers to political questions

But for the past four years there has already existed a UN commission for the investigation of atrocities and war crimes in the Syrian civil war.

To that, I can only say that JRR experts are assisting the UN investigative commission for Syria in its documentation of atrocities in this conflict. I only wish that we could already initiate proceedings to bring the responsible parties to justice.

You believe that it will come to this?

The perpetrators must be held accountable. The world must not let these atrocities go unpunished. The data being collected will help bring those responsible before the court.

Does this also apply to the perpetrators of a terrorist militia, such as those of the so-called Islamic State (IS)?

The responsibility for war crimes is a personal responsibility. It concerns individuals who order such crimes and carry them out. It does not matter whom these individuals are working for. The prosecution of war criminals also requires the work of truth commissions.

As was the case in South Africa.

Up until now, there have been truth commissions in more than 30 countries. They all offer victims the opportunity to tell their stories. This opportunity is often helpful in bringing a society onto the path of reconciliation.

The state institutions in Syria have been destroyed. It will need international commissions.

Syria is not the first country in the world where national institutions have come undone. I am an optimist and would never underestimate the possibility of a nation to take charge of its future. Reconciliation calls for the nationwide conviction that only justice can allow for new beginnings. If you cut your hand and develop an infection, your hand will not heal if you merely bandage it up. You also need to fight the infection.

In Burundi there are fears that genocide between the Hutus and the Tutsis could repeat itself, as happened in neighboring Rwanda. You only arrive after it has already happened. Isn’t this frustrating?

The psychological strain on the experts is indeed very high. Day after day, week after week they must face the victims and witnesses of atrocities. But JRR does not only come into play after atrocities. We also support mediators in conflict situations that could lead to atrocities. These mediators are also reliant on experts.

Are there more sexual assault in conflicts?

How did the program addressing violence toward children come about?

We are working with the former Lieutenant General of the UN Peacekeeping forces Roméo Dallaire on this issue. At the beginning of the Rwandan genocide in 1994, Dallaire asked the UN Security Council for reinforcement troops multiple times to no avail. Together with an organization established by him, we want to enable experts involved in war crimes investigations to deal with children as well – with children that are often victims, but sometimes also perpetrators.

As child solders, for example?

Yes, but they also always remain children. It is important that all of the aspects of war crimes are investigated in accordance with the highest standards.