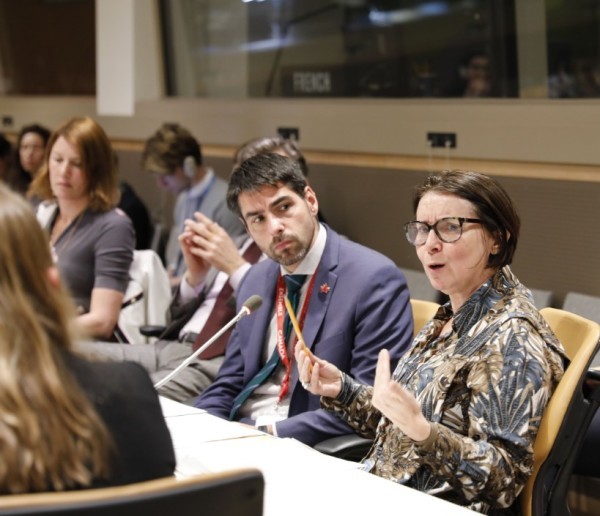 Using specialized expertise and a victim-centred approach in documenting sexual violence is crucial towards achieving accountability and justice for survivors of sexual and gender-based violence (SGBV), said panellists at a Justice Rapid Response event organized on the side lines of the Security Council Open Debate on Sexual Violence in Conflict.

Organized in partnership with UN Women and the Office of the High Commissioner for Human Rights (OHCHR), the event was sponsored by the Permanent Missions of Canada, Liechtenstein, the Gambia, Ireland and the UK, and it featured former gender advisors to UN mandated human rights investigations in Myanmar and Syria. The meeting took place one day after the Security Council debate, 23 April, that had culminated with the adoption of resolution 2467 calling on UN Member States to adopt concrete commitments to ending sexual violence in conflict.

Discussions at the Justice Rapid Response event centred on how gender expertise is a critical component of effectively documenting human rights violations and ensuring that the voices of survivors are central to investigations – as reflected in the text of resolution 2467.

“The resolution recognizes that it is crucial for gender expertise to be included in investigations, sanctions regimes and other mechanisms to be able to provide avenues for justice and for a survivor-centred approach,” said Federica Tronchin, Sexual and Gender-Based Violence Programme Manager at Justice Rapid Response. “Now we hope that the resolution will be followed by concrete steps.”

Panellists underscored that a gender and victim-centred approach at the core of all investigations is crucial for bringing justice to survivors of sexual and gender-based violence.

“Ensuring that the experience of sexual violence survivors is captured, is the first step toward accountability,” said Andrew Gilmour, United Nations Assistant Secretary-General for Human Rights. “We owe this to the survivors, including to help them rebuild their shattered lives and restore dignity.”

This was echoed by experts who form part of the Justice Rapid Response–UN Women SGBV Justice Experts Roster. Antonia Mulvey relayed her experiences as the former SGBV investigator to the Independent Fact-Finding Mission on Myanmar, where she said survivors need justice and are keen to have their stories heard.

“They wanted to talk – we hear sometimes that women and girls do not want to talk, but here they did,” said Ms. Mulvey. The mission established consistent patterns of serious human rights violations and abuses perpetrated mainly by the Myanmar security forces, particularly the military.

“Moving forward, what do they want?” Ms Mulvey asked later. “Justice. Victims know what justice is, they want accountability.”

Serena Gates, former SGBV investigator to the Independent International Commission of Inquiry on Syria, reiterated this urgent need for accountability, stating that in Syria there is deep-seated anger among survivors towards the international community for failing to act.

“There is a cyclical nature of sexual violence,” said Ms. Gates. “This is true domestically as much as it is internationally. Accountability allows victims to heal, but also prevents recurrence. We must bear that in mind if we want real progress to be made.”

The latest UN resolution puts the victim at the centre of the investigative approach, and calls for specialized gender expertise to systematically be integrated in UN-mandated human rights investigations, as it:

“Encourages relevant United Nations mandating bodies, as appropriate, in the establishment inter alia of commissions of inquiry and independent investigative entities to ensure that considerations to address sexual violence in armed conflict and post-conflict situations are included in their mandates and terms of reference, where relevant, and the Secretary-General to ensure that they are established and operationalized with the capacity and relevant expertise to address such considerations, and in this regard encourages the use of existing rosters of investigators with relevant expertise; emphasizes further that all efforts to document and investigate sexual violence in conflict and post-conflict situations should take into account the specific needs of survivors, be well-coordinated, and respect safety, confidentiality and informed consent of survivors as well as independence and impartiality, and that monitoring and investigation strategies are connected to specialized multi-sectoral referral pathways to services for survivors.”

This operative clause echoes best practices from the field of SGBV investigation, as summarized by participants of the experts meeting held in Geneva in September 2018 on gender integration in human rights investigations. The gender experts gathered by Justice Rapid Response, UN Women and OHCHR highlighted the benefits of a survivor-centred approach, focussed mandates and the proactive inclusion of gender expertise. They found that early engagement of gender experts and training for the entire investigation team are critical for successful gender integration at all stages of the investigation, from preparation, interviews and analysis, to drafting reports.

Since 2010, UN Women and Justice Rapid Response have partnered with OHCHR to deploy gender experts to document SGBV. Dozens of experts have been deployed from the JRR-UN Women SGBV Justice Experts Roster to UN commissions of inquiry, fact-finding missions and investigations led by OHCHR secretariats, to support the integration of a gender perspective. There are currently 238 SGBV experts on the Roster.