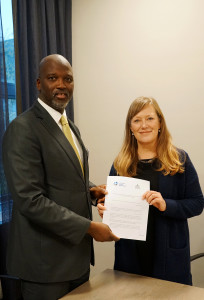 On 6 December in The Hague, Netherlands, Gambian Attorney General Minister Abubacarr Tambadou and Justice Rapid Response Executive Director Nina Suomalainen signed a Memorandum of Understanding (MOU) to guide their future collaboration in the area of accountability and transitional justice.

Learn more about our work in The Gambia in our short film, “From Fear to Freedom: The Search for Justice in The Gambia“