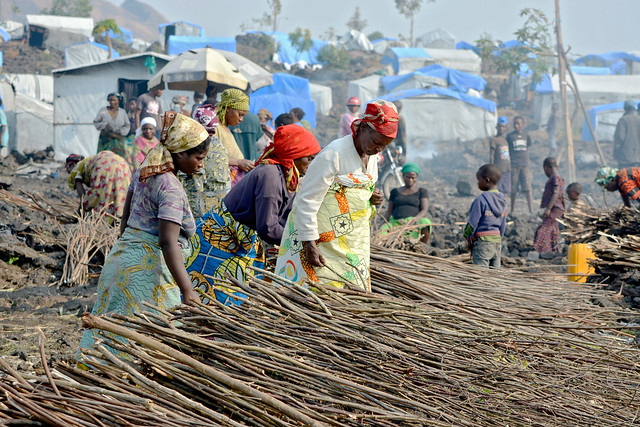 Internally Displaced Persons (IDP) camp in the North Kivu province, one of the regions affected by several years of civil war in the Democratic Republic of the Congo. The conflict dramatically affected the population there, especially women and girls, who faced the brunt of sexual exploitation and forced displacement. Photo: UN Women

On the International Day for the Elimination of Sexual Violence in Conflict, we honoured the victims and survivors of sexual violence around the world and stressed the importance of preventing sexual violence by addressing its root causes, including gender inequality. As we approach the 20th anniversary of Security Council resolution 1325 on women and peace and security in 2020, we join victims and survivors who demand an end to sexual violence in conflict, justice for violations, inclusive and sustained peace, as well as access to basic rights and services, including comprehensive sexual and reproductive health and rights.

In the past year, United Nations investigations and the Special Representative of the Secretary-General on Sexual Violence in Conflict have continued to reveal the high prevalence and severity of sexual violence in conflict. Sexual violence was used as a tool to displace populations, and as a means of repression, terror and control. Women and girls were significantly affected, although men and boys are also subjected to violations. Documenting these crimes is a critical step toward accountability for sexual violence, which is essential to ending cycles of conflict and guaranteeing non-recurrence of these crimes.

Amid ongoing violations, we wish to recognize local accountability efforts that integrate gender-inclusive and victim-centered strategies, supporting victims and survivors to access justice.

The Commission for the Verification and Recognition of Sexual Violence Victim Status in Kosovo[1] last year began providing reparations to survivors of sexual violence. In February 2018, more than 300 survivors have begun receiving a lifetime monthly pension in recognition of the harm they suffered during the conflict in the late 1990s.

A national court in Guatemala convicted four former senior members of the military for their involvement in crimes against humanity, including sexual violence, during the country’s armed conflict in the 1980s. These convictions handed down in the Molina Theissen case in May 2018, built upon Guatemala’s groundbreaking 2016 Sepur Zarco judgment, a case driven by a group of indigenous women who were systematically raped and endured sexual and domestic slavery during the armed conflict.

In January 2019, The Gambia’s Truth, Reconciliation and Reparations Commission began hearings into alleged human rights violations during the 22-year rule of former Gambian President Yahya Jammeh. The Commission hosts women’s listening circles to ensure female victims have a safe space to recount their experiences, including sexual and gender-based violence.

In April 2019, the Security Council adopted resolution 2467 (S/RES/2467 (2019)), recognizing that a survivor-centred approach is key to address and prevent sexual violence in conflict. The resolution also encourages United Nations investigations to use gender expertise from existing rosters to investigate sexual violence in armed conflict and post-conflict situations. The resolution was adopted after Nobel Peace Prize laureates Denis Mukwege and Nadia Murad called on the Security Council to commit to concrete steps to ensure justice, including reparations, for survivors.

UN Women and Justice Rapid Response will continue to support UN investigations and local accountability efforts for sexual and gender-based violence through the deployment of gender advisors. A joint roster of 240 gender and justice experts of more than 70 nationalities and 45 languages is available to the international community, to ensure that survivors of sexual violence during conflict are treated with dignity, and that their voices are heard in the quest for justice. We stand ready to support all efforts to realize the rights of victims and survivors to truth, justice, reparations and guarantees of non-recurrence.