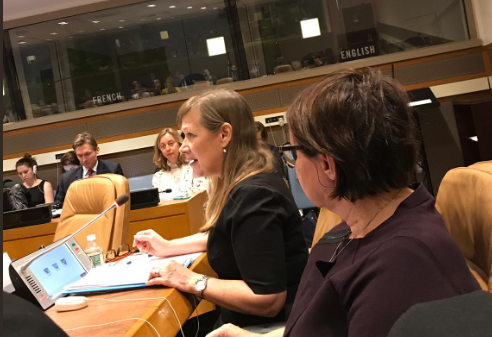 On 23 October, 2018, Justice Rapid Response Executive Director Nina Suomalainen was a speaker on a panel organized by The Permanent Missions of Finland and Liechtenstein to the UN. The event, titled “Prevention, Accountability and Gender – International Responses and Fighting Impunity by Investigating and Prosecuting Sexual and Gender-Based Violence” was held at the United Nations Headquarters in New York.

The event focused on efforts to investigate and document sexual violence in the Syrian Arab Republic, where there have been numerous documented instances of government forces, armed groups and ISIL fighters perpetrating sexual violence against women, men, girls and boys.

The event was opened by H.E. Ms. Kaija Suvanto, Director General, Legal Service, Ministry for Foreign Affairs of Finland. This was followed by short presentations by Ms. Catherine Marchi-Uhel, Head of the International, Impartial and Independent Mechanism for Syria (IIIM); Ms. Nina Suomalainen, Executive Director of JRR; and Ms. Charu Lata Hogg, Founder and Executive Director of the All Survivors Project.

In her remarks, Ms. Suomalainen noted that since the beginning of the conflict in Syria the demand for justice has existed alongside the determination to document violations, especially those related to sexual and gender-based violence. The Commission of Inquiry on Syria (COI) and civil society organizations have collected extensive information on sexual and gender-based crimes in this conflict—evidence-gathering that continues through the work of the IIIM.

Since 2011, Justice Rapid Response has deployed 15 experts to support the work of the Syria Commission of Inquiry, and has also provided expertise to assist the IIIM in fully integrating gender-sensitivity as it carries out its work. Ms. Suomalainen noted that gender expertise provided to these efforts in partnership with UN Women has helped the international community identify the nature and patterns of sexual and gender-based crimes in Syria. The work of these experts also ultimately contributed to the first dedicated report on SGBV published by the Syria COI earlier this year.

“In efforts of justice and accountability, we must confront gender-violence in all its forms and dimensions,” said Ms. Suomalainen. “We also must be equipped to respond to the differential needs of survivors. With the support of specialized expertise, we can ensure that the process of addressing sexual and gender-based crimes is sensitive, inclusive, and empowering.”

In conclusion, Ms. Suomalainen underscored the critical role of civil society in all justice efforts, including in the process of determining how best to confront past atrocities through efforts such as truth-telling, memorialization, and more.