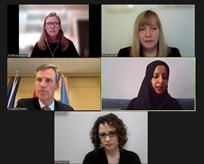 The principle of universal jurisdiction is an alternative tool for pursuing accountability for victims of the conflict in Yemen in the absence of credible national prosecutions and investigations by international mechanisms, agreed panellists at a live event hosted by Justice Rapid Response on International Human Rights Day, 10 December 2021.

Survivors of international crimes and serious human rights violations perpetrated in Yemen could begin to gain access to justice through courts outside their national jurisdiction, as seen last year for the Yazidi minority, said speakers at the event held alongside civil society organization Mwatana for Human Rights and with the support of the Ville de Genève.

They underscored that it has become imperative for an international justice mechanism to be launched considering the failure to renew the mandate of the UN Group of Eminent Experts on Yemen (GEE), but that drawing on the principle of universal jurisdiction could serve as an intermediary measure.

Sarah Finnin, an international legal consultant and a member of Justice Rapid Response’s roster, highlighted some of the challenges of universal jurisdiction, a principle that allows a national court to prosecute serious crimes against international law that occurred in another country. For instance, in the case of Yemen, it would involve investigating crimes that took place thousands of miles away, over several years and amid an extremely complex conflict. Access to evidence and securing international cooperation are crucial in such investigations.

“Despite these challenges, universal jurisdiction is increasingly seen as an important tool for achieving accountability and redress for international crimes,” Ms. Finnin said. “And for good reason. We are seeing more and more convictions.”

She cited the conviction of a former member of so-called Islamic State in November 2021 for genocide against the Yazidi minority in Iraq as just one example. In recent years, she said, there have been dozens of convictions handed down in third countries for serious international crimes, including crimes committed during the conflict in the former Yugoslavia, the 1994 genocide in Rwanda, and the more recent conflicts in Syria and Iraq.

Radhya Almutawakel, the co-founder of Mwatana, said she is emboldened in her work as a human rights defender by each of these milestones against impunity.

“The pattern for accountability is not for Yemen, it’s for the whole world,” she said. “Whenever there is a step moving forward like in Syria, Myanmar – in any conflict zone – towards accountability, it makes me stronger. Because it’s like an international pattern.”

In September 2021, the GEE presented the last of its four reports to the Human Rights Council detailing serious violations of international humanitarian law and international human rights law that are being committed in Yemen by all parties to the conflict. Findings of the GEE include indiscriminate or disproportionate attacks against civilians, enforced disappearances, torture, child recruitment and sexual and gender-based violence (SGBV). Following pressure from states, including parties to the conflict, the GEE was not renewed, thereby undermining accountability. This makes the need for universal jurisdiction ever more urgent, speakers said.

Glenn White, former SGBV Investigator and Gender Specialist for the GEE, speaking in his personal capacity, suggested that the end of the GEE’s mandate should be an opportunity to create an international criminal investigative body dedicated to Yemen. This would complement the urgent push for accountability through universal jurisdiction, he said. Ambassador Paul Bekkers, Permanent Representative of the Kingdom of the Netherlands to the UN in Geneva, underlined the strong need for accountability.

“The Human Rights Council has failed the people of Yemen and now more than ever it is of utmost importance that the international community should not turn its back on the Yemeni people and continue to explore options to purse accountability and redress,” he said. “It has in the past supported accountability in Yemen and it should not stop now.”

Mwatana has been documenting violations on the ground in Yemen in the hopes that this information can be used in the future towards criminal accountability and for dissuasive purposes.

“Parties to the conflict, all of them, local and regional, they don’t prevent these violations because they don’t care, they trust impunity more than anything else,” said Ms. Almutawakel. “So, we started at the beginning of our work to document and publish for advocacy purposes.”

The international community relies heavily on local organizations like Mwatana to document and report on serious violations including air strikes, SGBV, and torture in detention centres. Experts from Justice Rapid Response have worked with Mwatana to develop strategies for documentation and advocacy for justice.

“It is incredibly important that the international community support civil society organizations to document SGBV, including by standing firm against threats and attacks against human rights defenders, and by amplifying their demands for accountability,” said Paivi Kannisto, Chief of Peace, Security and Humanitarian Action at UN Women.

UN Women and Justice Rapid Response are going into the tenth year of their partnership on investigating SGBV and supporting front-line human rights defenders, through a sustainable approach to capacity-building.

“Our belief is that only when impunity for mass atrocities ends, we can bring justice and dignity to victims, survivors, and their communities.”