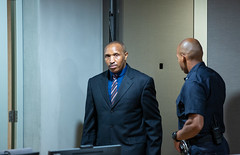 Bosco Ntaganda at the ICC

Ntaganda’s conviction for the forced enlistment of boys and girls in armed groups, and the perpetration of sexual violence against them, is an important step forward in ensuring justice for children in conflict.

Justice Rapid Response (JRR), deployed three investigators to support ICC investigations in the Democratic Republic of Congo (DRC), including a sexual and gender-based violence (SGBV) investigator, who was deployed in partnership with UN Women. The SGBV investigator assisted in collecting evidence that enabled the prosecution to demonstrate the alleged criminal conduct of Ntaganda in the commission of sexual crimes, and ultimately led the ICC Trial Chamber VI to convict Ntaganda of the sexual and gender-based crimes charges brought by the Prosecution.