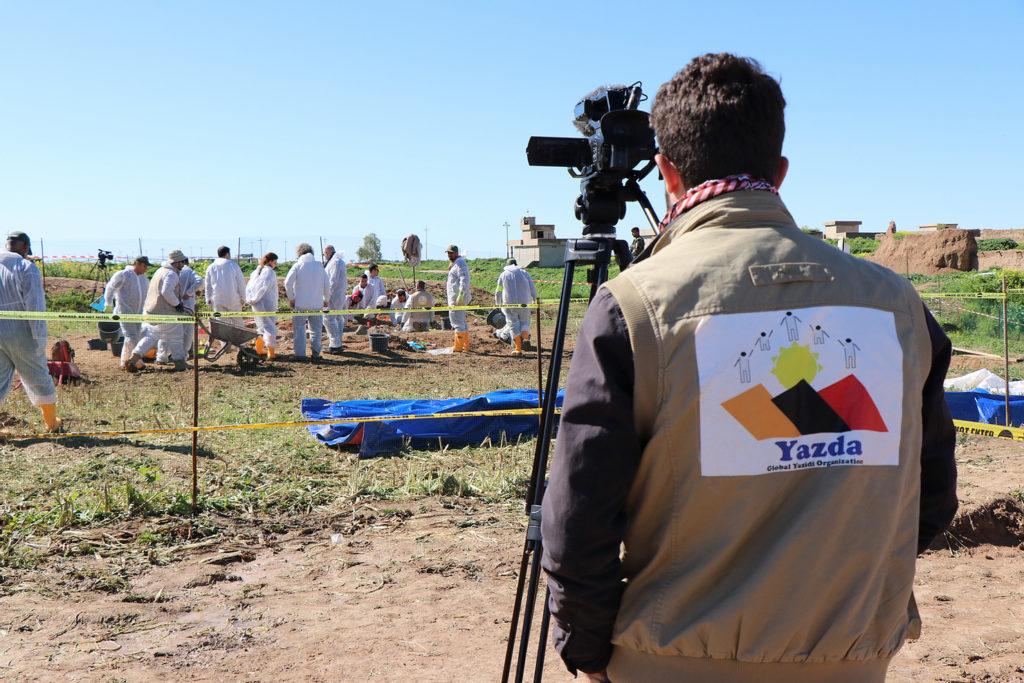 The sentencing of German woman “Omaima A.” in July 2021 by a Hamburg Court for enslavement marks the latest judicial milestone in the Yazidis’ quest for justice following atrocities carried out by the so-called Islamic State (or ISIL) against their community in Iraq and Syria.

Yazda – founded at the onset of the genocide in 2014 with the aim of protecting religious and ethnic minorities – and other civil society organizations have been gathering evidence in the hopes of seeing justice served. In the absence of an international accountability mechanism or a dedicated national justice process, a series of cases against alleged perpetrators has been brought to trial in Germany.

While Yazidi advocates welcome such cases, they say that much more needs to be done to create sustainable justice processes that are meaningful to as many survivors as possible. This can start with better communication about the existing cases to the Yazidi living in Iraq.

“All the cases are happening in Germany, but the community of survivors are in Iraq and is not informed about these cases,” said Natia Navrouzov, Legal Advocacy Director at Yazda. “Now people no longer want to share their testimony as much as before because they hear from other survivors that they will never see the results.”

On 22 July, a woman known under German privacy laws as “Omaima A.”, was sentenced to four and half years in prison for the enslavement of two Yazidi girls. Yazda had identified a central witness in this case, and put her in contact with the German prosecutors. This key witness also joined the cases against “Nurten J.” and “Sarah O.” – both of whom were convicted in 2021. Nurten J. was convicted of committing war crimes and aiding and abetting crimes against humanity, while  Sarah O. was convicted of numerous crimes including religious persecution and gender-based persecution as crimes against humanity.

Among the challenges prosecutors face when building the cases in Germany, far from where the alleged crimes took place, is finding evidence. This is where Yazda, with the support of Justice Rapid Response, has played a crucial role in compiling interviews and documenting crimes against the Yazidi that have in turn been used as evidence.

“Through years of meticulous documentation, Yazda has been able to provide crucial links that serve as evidence for the crimes committed by ISIL. While the individual cases only represent small steps towards justice for victims and survivors, they are nonetheless significant steps because it is the only form of accountability victims and survivors have been able to secure to date,” said Nilusha Goonetilleke, Programme Officer with Justice Rapid Response’s Civil Society Programme.

The charge of genocide

In a separate set of cases against “Jennifer W.” and “Taha A.J.”, Yazda helped the prosecutors in Germany to locate the mother of a deceased Yazidi girl. The five-year-old girl and her mother had been enslaved by Jennifer W. and her husband Taha A.J in Iraq. When the girl fell ill, Taha A.J. is said to have chained her outside in 45-degree heat as punishment and let her die. Both cases are ongoing.

The Taha A.J. trial is the first one in which an individual is charged with genocide against the Yazidi people. In general, prosecutors are less likely to pursue genocide given that it is one of the most difficult crimes to prove. But for the Yazidi people, it is important to get justice specifically for this crime and not only war crimes and crimes against humanity.

The mother of the slain girl is a central witness in the trials of both Taha A.J. and Jennifer W. – who is accused of war crimes and crimes against humanity – and has testified in court. She is represented by British barrister Amal Clooney, who has been outspoken in pursuing accountability for international crimes committed against the Yazidi.

Yazda is one of the main Yazidi civil society organizations in Iraq that is both gathering documentation and working directly with prosecutors in Germany and war crimes units worldwide. As a non-governmental organization, it has more flexibility than other organizations on the ground in terms of its ability to share information. It is also well placed to understand the communication gaps between justice processes abroad and survivors based in northern Iraq.

Yazda been calling for the creation of a committee to look for around 2,900 Yazidi women and children still missing, as well as to exhume the remaining mass graves in Sinjar, northern Iraq. It also wants to continue building a vision of justice with the direct input of the Yazidi community.

A patchwork of justice processes

In August 2014, ISIL attacked the Yazidi minority in Sinjar. Thousands of men were systematically murdered, while thousands of women and girls were forced into sexual slavery. The crimes have since been classified by the UN as genocide, but so far no ISIL member has been brought to justice for this crime.

“As a survivor who has been subjected to the most awful crimes against humanity, war crimes, and genocide crimes, all because of my Yazidi religion, I desire justice. But the justice I want and deserve is currently not possible in Iraq,” said Hala Safil, a member of the Yazidi Survivors Network, which advocates for the rights of Yazidi survivors and survivors of other cases.

“I would like to see the establishment of an international tribunal to bring ISIL members to justice and for them to be held accountable,” said Ms. Safil. “It is crucial to work on a justice mechanism in a serious manner because this is the key to bringing back coexistence and peace building among all communities in Iraq.”

Most of the alleged perpetrators standing trial have been nationals of the countries where they are on trial. Taha A.J., as an Iraqi citizen, is the first foreign national being tried in German courts. This case falls under the principle of universal jurisdiction which allows a national court to prosecute individuals regardless of their nationality or the location where the crimes were committed.

Yazda is ready to support as many judicial options as possible in the Yazidi quest for justice – be it universal jurisdiction, personal jurisdiction, UNITAD (the UN’s investigative team for promoting accountability for crimes committed by ISIL), or future international or domestic tribunals.

“Our goal is to interview every single Yazidi survivor, not only for accountability, but also to archive the genocide for Yazidi history,” said Ms. Navrouzov.

Only 3,500 Yazidis came from captivity following the fall of ISIL. Yazda has so far interviewed 2,000 of these survivors.

To date, Justice Rapid Response has provided 17 expert deployments to support Yazda, including a data management expert, a forensic advisor, a child rights expert, as well as several SGBV experts and translators.