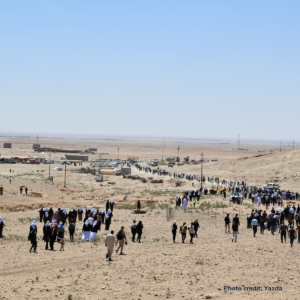 In 2014, ISIS, the self-proclaimed Islamic State of Iraq and Levant, also known as Da’esh, invaded Northern Iraq’s territory of Sinjar, the homeland of the Yazidi ethno-religious minority indigenous to the Kurdistan region (spanning across parts of Iraq, Turkey, Iran and Syria).

In an attempt to ethnically cleanse the Muslim territory over which it wanted to exercise political and theological control, ISIS undertook a campaign to eliminate the Yazidis “mushriqin”, or devil worshipers.

In what was later qualified as a genocide, ISIS fighters killed, kidnapped and forced into sexual trafficking and slavery thousands of Yazidis, and forcing hundreds of thousands more to flee. Another 2,800 children and women are still missing today.

As often is the case in conflicts around the world, ISIS used sexual violence as a weapon of war. ISIS’s fatwas, issued in the Da’esh magazine Dabiq, urged militants to kidnap, enslave, traffic, and rape Yazidi women to destroy their community from within.

Local NGO Yazda was founded in the wake of the genocide to protect and support the female survivors who risked their lives to escape captivity. It created the Yazidi Survivors’ Network to encourage survivors to speak out about their experiences, express their needs and fight for international accountability.

To help Yazda collect evidence effectively and promote the survivors’ access to justice, Justice Rapid Response provided it 19 times since 2017 with experts specialized in a variety of key areas – from interviewing survivors of sexual and gender-based violence, to forensics, data management, child rights, and international human rights law.

Teaming up with other national counsels, they took ISIS cases to Germany, under what is called universal jurisdiction, which allows any country to have jurisdiction over crimes so severe that they concern the entire international community.

On 30 November 2021, a German national court issued the very first conviction against an ISIS member for genocide, crimes against humanity and war crimes.

This historic verdict was crucial for all Yazidis and for survivors of sexual and gender-based violence worldwide whose bodies are used as battlefields. It was a formal acknowledgement of the traumas they have endured and of the years of reliving them by sharing their experiences to constitute evidence.

The recognition of the Yazidi genocide helps survivors heal and gives hope to those who have endured systematic abuses and lost their dear ones because of their cultural identity, that their efforts can help prevent other such crimes.

So far, the Yazidis’ fight for justice has led to several convictions of ISIS members for international crimes, which may seem minuscule an achievement compared to the enormity of the suffering. The international community must keep supporting the Yazidis by placing them at the core of peacebuilding efforts, and continue pursuing legal accountability for ISIS crimes, which is essential for the community’s recovery and continued life in its homeland.